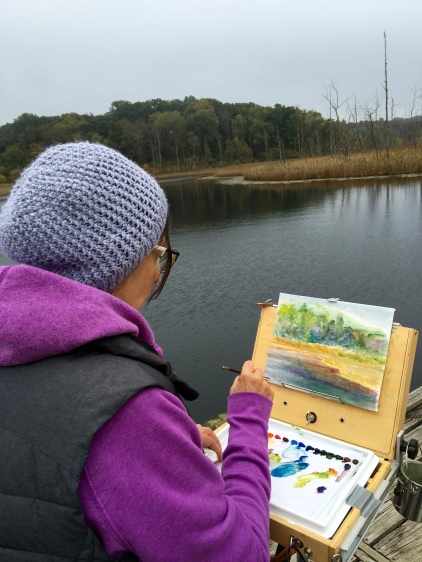 A chilly start to painting at Lake Lonidaw, but nothing a hot cup of coffee and a beautiful view couldn’t handle.

Never stand near an artist holding a wet paint brush who likes to talk with her hands.

A crowd busy painting at the nature center.

I’m tempting young artists with Inktense watercolor pencils. They’re the bomb for drawing and then filling in with waterbrushes.

Some adults join the fun.

Still practicing on buildings. At least I could paint on the Potawatomie Inn beach in the afternoon.

A gorgeous painting opportunity on the beach was worth the bad hair day!

I couldn’t have asked for a better finale to cap off my 2016 Arts in the Parks grant than my final program at Pokagon State Park near Angola, Indiana. Located in Indiana’s lake country at the very northeast corner of the state, Pokagon borders two natural lakes and was named for the last notable leaders of the Potawatomi native people, who sold one million acres to the federal government (including the area that became Chicago) for the price of three cents an acre.

The park offers two beaches, 12 miles of trails, wooded hills, wetlands, open meadows and even a toboggan run built by the CCC in the 1930s. The lakes as well as the marshes, fens, swamps, pine groves and other unique ecotypes typical of more northern regions were created by one of the last glaciers to cover Indiana ten thousand years ago. Land that was farmed decades ago has been allowed to return to its natural state, and the nearby Trine recreational area added in 2007 complements Pokagon as part of local and statewide efforts in land and water preservation.

I spent a chilly but pleasant morning painting on the pier at Lake Lonidaw, a kettle-hole lake formed when sunken blocks of ice broke away as the glacier melted. The  mat of reedy vegetation along the edges fools you into thinking this is a stagnate pond, when in reality this constantly moving body of water drops off to a depth of 30 feet. Armed with a cup of hot coffee and plenty of duct tape to keep my supplies from flying into the lake, I made good progress capturing fall foliage in oil, saw a great blue heron glide by, heard plenty of red-winged blackbirds, and engaged with a morning tour group led by a Pokagon interpretive naturalist.

At noon in a wonderful gathering area full of comfortable tables and benches outside the nature center, I received a tremendous response to my watercolor painting activity with over 40 kids and adults trying out my watercolor kits, waterbrushes, Inktense watercolor pencils, and Micron drawing pens with ink that doesn’t run when you paint over it. By far the largest turnout of all the park events, I’m pleased to say that every piece of watercolor paper I brought was used and some wonderful connections were made, including a family who just happened to stop by on their way to Ohio to see their son in college, a little girl who spent two hours on a beautiful tree inspired by something in my sketchbook, and a student from an Indianapolis art institute who is adding her watercolor painting to a school art project focusing on geography.

I finished the day at the Potawatomi Inn beach on Lake James, with the sun casting interesting shadows on the little boat house I was painting, and the brisk fall breeze spurring on the little white-capped waves that raced to shore. I had some great, leisurely conversations with curious visitors and interested painters about my painting subjects, equipment and set up. All told, I engaged with over 100 park visitors during my final painting event, with the added treat of spending a long weekend at beautiful Potawatomi Inn, built in 1927.  Many thanks to DNR naturalist Marie Laudeman and the rest of the park and inn staff for such a successful and pleasant visit; and to the Indiana Department of Natural Resources, the Indiana Arts Commission and the Indiana Bicentennial Commission for their support throughout my 2016 Arts in the Parks grant.

My painting programs may be completed for the year, but I’ll still be painting outside whenever there’s a good day this fall (and maybe even winter) while I continue to finish the paintings I began at all the wonderful state parks I had the privilege to visit this year. As a way to brighten up bleak winter days, I’ll also be working on new paintings inspired by the wildflowers I photographed on my walks along the trails. So, stay tuned for regular updates to Paints in the Parks and thanks for following along.

2 thoughts on “Praise for Pokagon”