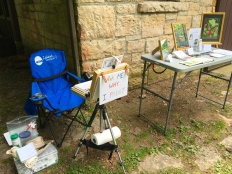 My set up at the Nature Center during the noon hour. I encourage everyone who stops by to make some art and try out my watercolor brushes and field paintboxes.

Working on a pastel along the trail overlooking Clifty canyon and next to a handy shelter in case of rain.

Discussing my painting technique with a curious hiker at the Big Clifty overlook.

My subject matter may be hard to see, but it’s back there in that gap between the trees. The eye always sees more no matter how good the camera is, one of many benefits to painting on site.

This past Memorial Day weekend found me painting up a storm at Clifty Falls State Park near the mighty Ohio river and Madison, Indiana. Created by Ice Age glaciers millions of years ago, the waterfall that has cut away the soft shale from hard limestone bedrock can be found some two miles away from where it first began on the Ohio river banks, leaving a deep canyon in its wake.  Sixty feet high and supplied by this year’s ample spring rains, I could hear the roar of Big Clifty  while I set up my easel for the morning demonstration.

My painting spot was one of several prime viewing areas protected by stone walls built in the 1930s by the Civilian Conservation Corps where Brad Hessans, the park’s very knowledgeable interpretive naturalist, stopped to point out fossils embedded in the stones. Creek beds and rock formations throughout the park hold many examples of fossils from an ancient marine ecosystem full of corals and brachiopods.

The campgrounds and inn were also full at Clifty for the holiday weekend, and I was able to engage over one hundred visitors throughout the day on Saturday at several locations in the park. I worked on a small oil painting of the Falls in the morning, and a pastel of a long-range view of Clifty Falls from a lookout point on the trail in the afternoon. The trails range from rugged to easy, and there’s plenty to do in the park, as well as the nearby cities of Madison and Louisville.

Established in 1920 at the suggestion of Richard Lieber, father of the Indiana state park system, Clifty Falls is the first of six state parks I’ll visit this summer and fall. If you get the chance, I encourage you to come visit Clifty’s stunning waterfalls and scenic overlooks. My next stop in June is Mounds State Park near Anderson, Indiana. Until then, grab some supplies and go make some art outside!

2 thoughts on “Falling For Clifty Falls”